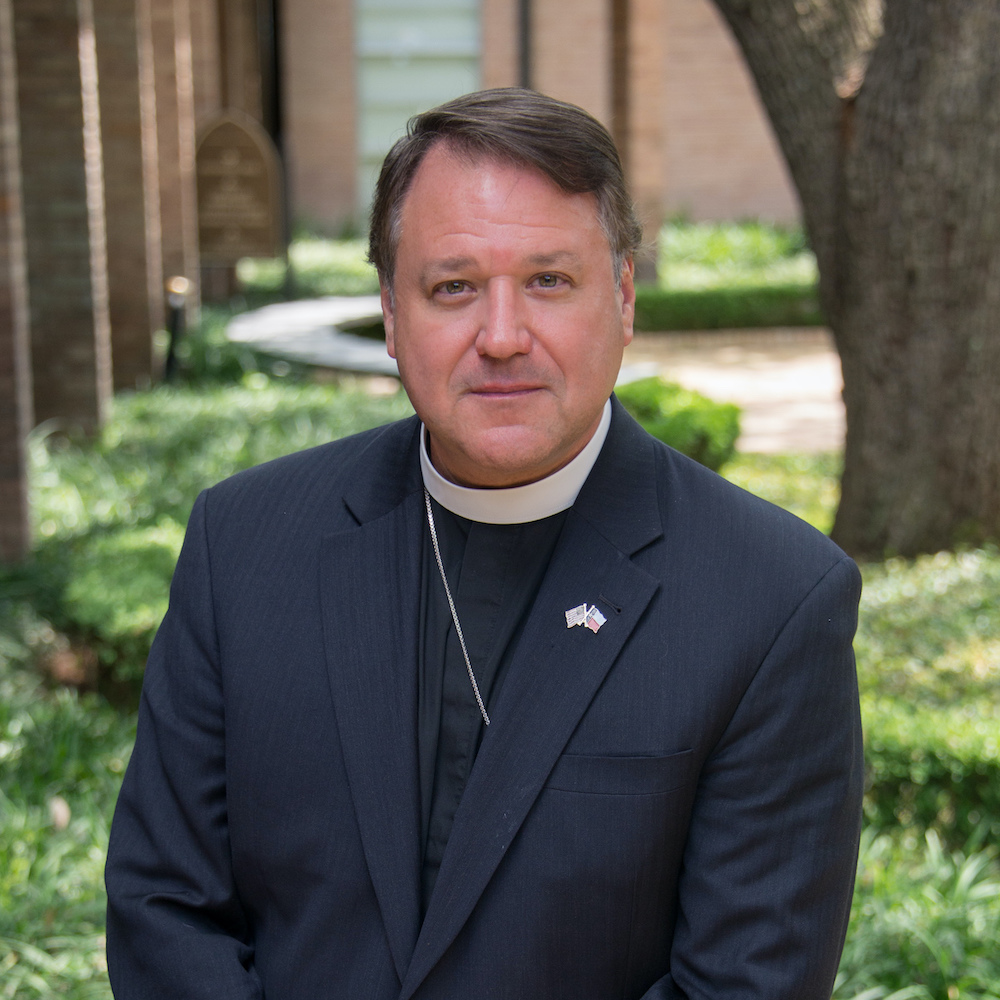 The Reverend Dr. Russell J. Levenson, Jr. began his tenure as Rector of St. Martin’s 15 years ago in 2007. He and his wife, Laura, have three adult children, Evie, Jones and Luke, and two grandchildren, Genny and Austin. They love serving Our Lord Jesus and all of his children of the St. Martin’s Family.

Dr. Levenson graduated with honors from Birmingham-Southern College, receiving the College’s highest service award, “The President’s Student Service Award.” After a few years in educational administration at his alma mater and then a few years as a Lay Minister at his home church of St. Luke’s in Birmingham, Alabama, the Levenson family moved to Alexandria, Virginia, where he completed his Master of Divinity at Virginia Theological Seminary. During his seminary years, he served at historic Christ Church in Old Town, the home parish of President George Washington.

After his graduation and ordination, he served as Assistant University Chaplain at the University of the South, before returning once more to St. Luke’s in Birmingham, where he served as Associate Rector under his long-term mentor and friend, the late Rev. Dr. John Claypool. During this season of ministry, he also completed a Doctor of Ministry in Spiritual Formation at Beeson Divinity School, before being called as Rector of The Episcopal Church of The Ascension in Lafayette, Louisiana, where he served for five years before being called as the Rector of Christ Church in Pensacola, Florida, where he served until coming to St. Martin’s.

Shortly after coming to St. Martin’s, he spearheaded the Parish’s vision for the Hope and Healing Center and Institute. The Center offers recovery and support groups; lectures and workshops on behavioral, emotional and mental health; therapeutic evaluation and care; telepsychiatry and therapeutic referral. Serving more than 800 individual clients each week, the Center never charges for the many services it provides.

Dr. Levenson has served on a number of Boards and Advisory Councils over the years including the Board of Advisors for Beeson Divinity School, St. Luke’s School of Theology at the University of the South and the Living Church Foundation. Presently, he serves on the advisory board for Amazing Place and Day 1, a national Christian radio organization recognized as the voice of the historic Protestant denominations and as a member of the Office of the Development Advisory Committee for the Episcopal Church, New York City.

In 2015, he was admitted as a member of the United States Priory for the Order of St. John of Jerusalem. On June 24, 2020, he was appointed Sub-Prelate of the Order and in 2021, by appointment of Her Majesty, Elizabeth, Queen of England; he was elevated as an Officer for the Priory. The Priory is a public charity that supports the humanitarian endeavors of St. John of Jerusalem Eye Hospital Group, the only provider of expert eye care in the West Bank, Gaza and East Jerusalem, treating patients regardless of ethnicity, religion or ability to pay. In the U.S., the group also assists disabled and disadvantaged Veterans through the St. John Volunteer Corps.

In January of 2017, he officiated and preached at the Memorial Service for Captain Gene Cernan, “The Last Man on the Moon,” after they developed a deep friendship in the astronaut’s later years and he began worshipping alongside others at St. Martin’s.

In 2018, Dr. Levenson officiated and preached at the Memorial Service at St. Martin’s for the late First Lady of the United States, Barbara Pierce Bush. Later, in 2018, he co-officiated and preached at the State Funeral for our 41st President, The Honorable George H.W. Bush at both Washington National Cathedral and the Houston-based memorial service held at St. Martin’s. President and Mrs. Bush were active members at St. Martin’s for over fifty years and served in many roles of leadership and ministry.