Since its founding in 1952, St. Martin’s Episcopal Church has grown to become the largest Episcopal Church in North America with more than 9,800 members. The Parish celebrates worship at six Sunday and three Wednesday services in both traditional and contemporary liturgical styles. Our worship services provide an opportunity to give thanks and praise to God in the Anglican evangelical and orthodox tradition.
The Church offers a wide range of Sunday School classes for the entire family, as well as numerous Outreach and Missions opportunities, and a variety of programs and events for adults, youth and children.

Who was St. Martin? 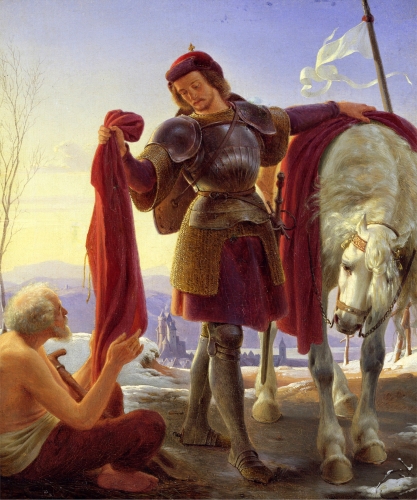 St. Martin is one of the most familiar and recognizable Christian saints. He was born in 316 in what is now modern-day Hungary and grew up in Italy, where his father was a tribune for the Roman army. Martin converted to Christianity at a young age before joining the Roman cavalry.

Martin’s faith conflicted with serving as a soldier and he resigned his post. He followed a simple life as a monk and founded the first monastery in Gaul (present day France) in about 360. Martin then traveled by donkey and boat to spread the news of Jesus Christ and was sought out for his healing prayers for the sick.

He was appointed Bishop of Tours in 371 and recognized as one of the greatest evangelists of the Church. He died in November 397.

In the Middle Ages, more church parishes chose Martin as their patron saint than any other saint. Nov. 11, the day St. Martin is believed to have been buried, has been celebrated as St. Martin’s Day for more than 1,600 years.

Fun Facts / Did You Know?

Look here for other helpful resources.